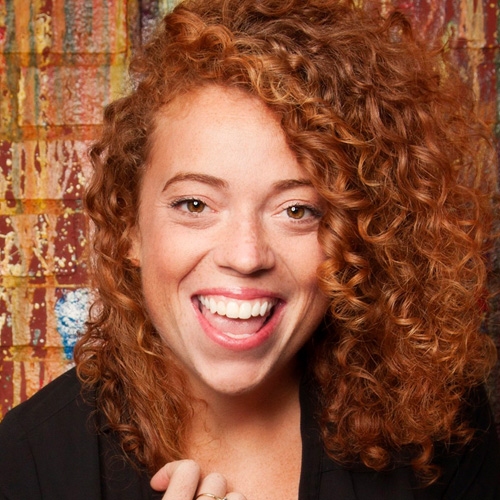 What’s Donald Trump’s favorite proverb, again? The one about the woman and the snake? The one that says, essentially, “When people show you who they are, believe them!”? Yeah, that one.

The president likes to use it to stoke anti-immigrant anxieties among his followers, and the press reports on it that way. Personally, I think he’s just softening the ground for when all his crap comes to light, but for now, let’s take his advice: when a comedian from a late-night, left-leaning comedy show tells you, word-for-word: “This is who you’re getting tonight” and “Yeah, shoulda done more research before you got me to do this” don’t be shocked when she bites! Michelle Wolf‘s performance at the White House Correspondents Dinner — an outdated, pointless DC event that EVERYONE hates — was not so much an attack on President Trump’s terrible values and corrupting influence, as it was just one more example of his Administrations’ inability to properly vet candidates for anything and its overarching disdain for expertise.

Pro Tip to whoever is really the Chief of Staff (because this thin-skinned bunch had to have final approval): Comedy is a profession. It takes a performer years to perfect a routine, to craft and structure a joke so that it lands, no matter who they’re in front of or where they are. They do this in bowling alleys, dinner theaters, restaurants, small rooms in large towns, big rooms in small towns. They bomb, they kill, but most of all, they work and they have a point of view. Michelle Wolf doesn’t care if the room was cold; she was at work. She is a 32-year-old woman who writes and performs “observational” comedy and what she’s observing in the Trump Administration is a venal, handsy grifter in the highest office of the land, served by sycophants, liars, and a political class that is happy to overlook his myriad failings, both as a person and a public servant, in order to advance an agenda that is harmful to women, people of color, and poor people.

She did her job.

Good comedians are honest with themselves and their audiences. You can be a good comedian and not appeal to everyone’s taste. Michelle Wolf was good.

Wolf ragged on herself, on Congress, on the press, on the president, and on the situation we are all in. On the whole, a pretty solid set, with a few minor vulgarities of the type the president himself apparently uses in the gold-plated locker rooms of his many golf properties. But oh, the outrage! The hollow hand-wringing over decorum and (god help us) norms of behavior, with a goodly dose of willful misinterpretation.

I actually heard some woman on one of the Sunday shows interpret the following joke as a slam on Sarah Huckabee Sanders that implied she is a “fat lesbian“:

We’re graced with Sarah’s presence tonight. I have to say I’m a little star-struck. I love you as Aunt Lydia in “The Handmaid’s Tale.”

Mike Pence, if you haven’t seen it, you would love it.

Just…what?! How partisan do you have to be to interpret a pretty accurate reading of Ms. Sanders’ position as mouthpiece for a misogynist White House as a dig on her looks or orientation? Or rather, how top-of-mind are your own feelings about Sarah Sanders that you just assume any joke about her would be about her appearance?

I have to hand it to the Press Secretary: she sat there and took it. Her job is difficult and I loathe how she approaches it, but she took the lumps, unlike her boss, who was far, far away, stepping on his tongue and the rule of law all the while basking in applause. Like all bullies, he is a coward who can’t take a joke.

Look, if the Administration really wants to go through this again next year and wants a comedian more in line with Making America Great Again, they can find one. Any morning DJ show, or in Howard Stern’s contact list, or most male headliners from the 80s. One time I saw a guy in Los Angeles in 1984 talk for close to an hour about trying to get laid, finally getting laid but the girl was ugly, and how hard it was to poo sometimes. Oh wait. That was every time.

The point is, pick one that speaks your truth. I’m pretty sure this guy is available: 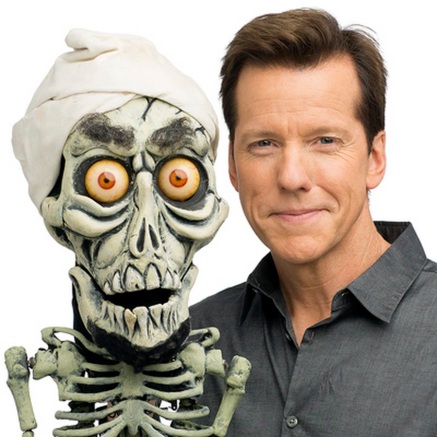 Meanwhile, spare me the pearl clutching.

Ten things Scott Pruitt could do instead of feeding his fevered paranoiac delusions that the Deep State is bugging his phone, in ascending order of likelihood:

1.  Pay the average starting salary for any teacher in America for a year or more.

2.  Send a kid to an in-state public college for four years and throw in books and supplies.

3.  Hire a program assistant at a worthy nonprofit.

4.  Pay the annual water bill for 50 residents of Flint, Michigan.

5.  Purchase a rare, inscribed edition of Darwin’s On the Origin of Species.

6.  Pay actual market value for a one-bedroom apartment near the Capitol for just under 2 years.

7.  Treat himself to a new face every year for 4 years.

8.  Treat each one of the 248 Republicans in Congress to the Grande Plateau at Le Diplomate.

9.  Take his two favorite staffers on a two-week luxury cruise to the Cayman Islands to do a little sunbathing.

What do you want, Joe, my life’s history? Here it is in four words: big ideas, small results. — Barbara Stanwyck, Clash By Night (1952)

It’s been ages since I woke up with an earworm, but I had a lulu the other day that took nearly 48 hours to shake: “Don’t Cry Out Loud,” Melissa Manchester, 1978 — a song I hate and only the refrain. It’s the kind of tune I might hum to snap myself out of stiff-upper-lipping a situation unnecessarily, something my subconscious, apparently, was trying to tell me to do.

I’ve been in a mood lately about what I think about doing compared with what I actually get done. Eighty-five percent of the time, I’m content to dip in and out of writing, research, and art projects; happy to pick things up, turn them around, then misplace them forever. At 53, I am unlikely to develop a greater attention span or a more capacious mind or a sudden drive to achieve. I was just hoping this would quit bothering me — when it does bother me — at some point.

Plus, the things I like to do are silly. About a decade ago, for instance, I kept a record of my (then) daily earworms for 18 months, categorized them, and ran some numbers. Looking at the spreadsheet now, I see that some of the numbers don’t add up, so I have spent my lunch hour messing around with data that 1) no one needs analyzed and 2) is old and poorly organized.

One thing I notice right off the bat is how much Excel charts and pivot tables have improved in 10 years. Astonishing! After that, it appears that the mean year of origin for my earworms was 1973: when I was nine-ish and picking my own AM radio stations (probably). There are two mode years: 1965 (I was born in late 1964); and 1979, around the time I started buying my own music on the regular. 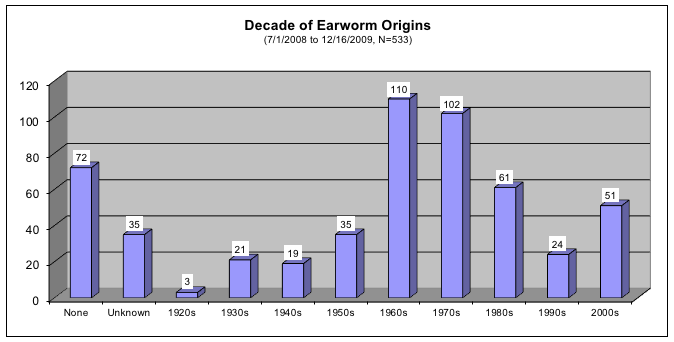 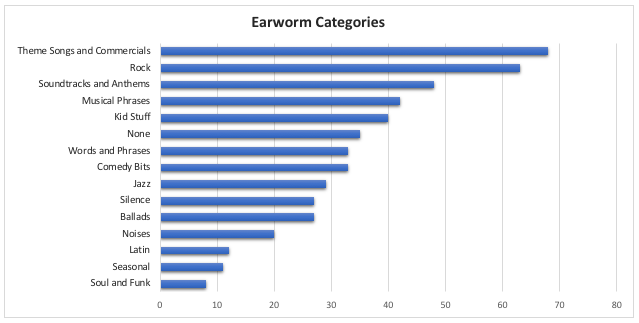 Anyway, Carole Bayer Sager (still alive) wrote “Don’t Cry Out Loud” with Peter Allen (not alive), an Australian singer-songwriter whose father committed suicide when Allen was 14. Turns out this was the advice given by his mother in order to encourage Allen to keep his “best face on” for his baby sister and the world. Terrible advice that turned into Billboard’s 26th biggest hit of 1979.

It also snapped me out of my little midlife crisis.

Almost had it all.