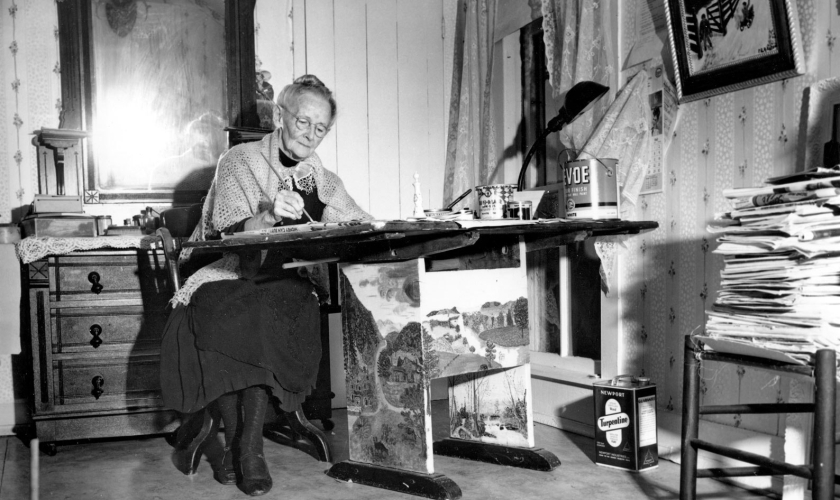 Tomorrow is my 55th birthday. That means I can remember, in some detail, stuff from half a century ago. One such incident was the “Pin the Man on the Moon” game my mother made for my sister’s sixth birthday, which also happened to be the day of the Apollo 11 moon landing. We played the game on our grandparents’ garage door next to Mom’s Volkswagen Beetle. On the shelf in Grandma’s kitchen, she had packs and packs of playing cards tied with rubber bands stacked next to grandpa’s medicines, Pine Bros. cough drops, and the single-serve packs of castor oil my sister and I had to take for some reason when we visited. Grandma told fortunes with these cards, played 100 kinds of solitaire, and occasionally cheated at gin rummy. She was 56 in July 1969.

Fifty years is long time. I think about it constantly. In my grandmother’s lifetime (at least up to the moon landing) she had observed a breathtaking amount of change: When she was a little girl, for example, the United States entered the First World War a wealthy, industrialized, isolationist nation and emerged a world superpower. The Influenza Epidemic ravaged the country shortly thereafter, which, as a child in the crowded Bronx, she probably felt more keenly. Women won the right to vote when Grandma was eight years old and the fact that I knew people personally who were not born with the franchise makes my head explode.

Penicillin, though, that was a good thing. Also, radio, commercial air travel, Hollywood musicals, the Interstate Highway System, and the Civil Rights Movement. On the other hand, there was The Depression, Jewish quotas, the rise of Fascism, a Second World War, the Holocaust, Japanese Internment Camps, the BOMB, McCarthyism, the Kennedy Assassination, the King Assassination, and the other Kennedy Assassination. Such a long string of disasters and recoveries, revolutionary advances and depressing regressions: Segregation and the Salk Vaccine.

Every fifty-year block no matter when it begins is historical, but whether one’s epoch turns out to be consequential is chance. Mine, for example, started with NASA and appears to be ending with Space Force, so I guess we know where I’ve landed. All I know for certain is that any long-overdue, teeny step forward will be met with a wholly disproportionate backlash and any sweeping advance in science or medicine will bypass some underrepresented demographic. Ask the Black veterans of World War I or any woman seeking maternal health care in the richest country in the world today.

For my part, I have lived through changes I never saw coming. I came out in high school at the height of the Moral Majority with very few consequences, but not many expectations. Not having a conservative or particularly religious family, the whole thing was met with relative unconcern and I was lucky. My gay male friends, however, got way more heat at the time and I’m sorry to say it did not “get better” for all of them. When I moved from upstate New York to the midwest, I found out that you could be arrested for going to certain gay bars and that your name and address would appear in the papers the next day. Today, they’ll print your engagement photos on the society page, and that is significant progress. Unless you want one of them Pizza Weddings.

At the same time, I never expected the Christian right to become quite so politically powerful. As one after another of their leaders got busted for sex scandals or graft, it just seemed unsustainable. I lived in San Francisco during a particularly effective consolidation of that power: right after Bowers v. Hardwick, just in time for ACT-UP. Lyndon LaRouche was advocating for the quarantine of HIV-positive people and Oliver North was lying to Congress about the Contras. They were crazy people, but we were infighting. I remember getting blowback from my LGBT activist pals because I voted for Nancy Pelosi in 1987 instead of the gay candidate. Two intentionally divisive HIV-stigmatizing ballot propositions pitted mainstream gay activists against people of color and boy, howdy, it worked. Turns out racism and misogyny are not traits confined to conservatives. I just figured we’d get past it and they’d get bored — or indicted — but I was wrong.

We may not have had Twitter to keep the nonsense in our brains every minute of every day, but we did have Iran/Contra, Willie Horton, Anita Hill, Dan Quayle, the first Gulf War, the L.A. Riots and critical thinking skills. At the time (and bless my heart) I sincerely believed that George H. W. Bush was the devil.

Bush, Jr. and Dick Cheney put that notion to rest in short order. We didn’t even get much of a breather in Bill Clinton, thanks to his personal failings and Newt Gingrich’s delusions of grandeur. But from hanging chads to blowing the surplus to the wars in Iraq and Afghanistan, Abu Ghraib, and Guantanamo, the whole neo-con enterprise was an eye-opener. Oh, and the Great Recession.  And Karl Rove. And Swift-boating! I didn’t think it could get any darker, and yet…

You know what, fuck those guys; they’re still the Worst.

Writing all this down is giving me heartburn. Remember when we elected Barack Obama by huge margins and everyone felt great for about 15 minutes that the country had finally made strides in the right direction? Here’s a fun fact: in 1917 when Jeannette Rankin was sworn in as the first woman ever elected to Congress, the entire House burst into applause and they wouldn’t stop until she got up and took a bow. They did it because it was a big goddamned deal and they knew it was a big goddamned deal. You know the  next time women being elected to Congress excited the national imagination? Seventy-five years later, when four whole women got elected all on the same day in 1992. They called it “The Year of the Woman.” Four women.

Our last president served two scandal-free terms, rescued the economy, saved the auto industry, and passed major health care reform in the process. Naturally, he was succeeded by a misogynist, adulterous, grifting, conspiracy monger with the temperament of a two-year-old and a cult-like following. What I like to think of as an astonished nation elected more women to Congress than ever in the 2018 midterms and Speaker of the House, Nancy Pelosi (you’re welcome), is moving ahead with the impeachment of a manifestly unfit president.

Forgive me for not doing back-flips just yet. Yes, a lot of good has come to pass these last 50 years. We have personal computers, email, the Internet, Phoebe Waller Bridge, and smartphones, but at least four out of five of those things are responsible for the situation we are in today. “History never repeats itself but it does often rhyme” said Mark Twain, and so very many cable pundits these last three years. I’m afraid it won’t even do that unless we all agree on what it sounded like in the first place.

Tomorrow is my birthday. For the record, we are NOT at war with Eastasia today.